5 Common parliamentary titles and when to use them 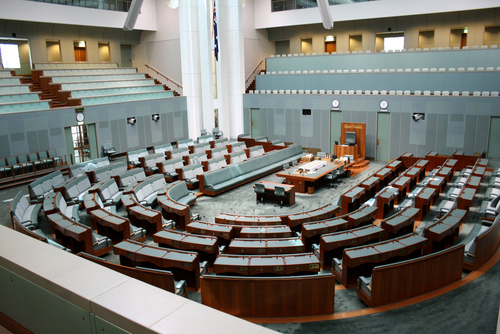 5 Common parliamentary titles and when to use them

Positions within Parliament come with a range of titles that must be used when formally addressing the person holding that position. While these follow similar patterns, the use of such titles varies from State to State. Both the private and public sector should learn about these titles. The five common titles of the Federal Parliament, and when to use them, are outlined below.

Individuals elected to the House of Representatives receive the post-nominal MP (meaning Member of Parliament) while they hold their position in Parliament. The post-nominal should be included in the address for envelopes and letters (Mr John Doe MP) but not in the first line of the letter or email or when speaking directly to them (Mr Doe).

Individuals elected to the Senate receive the title of Senator while they hold their position in Parliament. The title replaces Mr/Ms on envelopes (Senator John Doe) and should be used by itself in the first line of the letter or email or when speaking directly to them (Senator). By definition, a Senator cannot also be a Member of the House of Representatives, so you should never see Senator and MP together (Senator John Doe MP).

Ministers and Assistant Ministers can be appointed from either the House of Representatives or the Senate. The title (Minister or Assistant Minister) should be used in the first line of a letter or email or when speaking directly to them. It is not included in their name on an envelope, but their full Ministerial title should be used as their position in the second line of the address block.

Example writing about parking in their electorate:

Ministers and Assistant Ministers are appointed to the Executive Council and this brings with it the title of ‘Honourable’ which they usually hold even once they are no longer in the position, for

example as a result of a change of government. The title is usually shortened to ‘The Hon.’ except when formally and verbally introducing them, such as at an event. On letters, The Hon. replaces Mr/Ms for individuals in the House of Representatives (The Hon. John Doe MP) and follows Senator for individuals in the Senate (Senator the Hon. John Doe) in the address block. It is not used in the first line of a letter or email or when speaking directly to them.

Prime Minister/Speaker and other prominent positions

This article originally appeared on fpladvisory.com.au.

Previous Article
Government against the giants: can government effectively regulate social media?
Next Article
The Public Sector Must Combat The ‘Trust Deficit’ In 2020

We would like to acknowledge the traditional owners of this country and pay our respects to Elders past, present and emerging.
All rights reserved. © Public Spectrum made by Akolade.